Sometimes in life, the passion finds you, and your world is forever changed. This is exactly what happened to Robin Chapman.

During college, her studies in Italy in the early 90s fostered her innate interest in different cultures, languages, people, and customs, specifically how people viewed, practiced, and understood health and medicine. Upon her return to the U.S., she changed her major, and in 1996, Robin graduated from The University of Vermont with a major in anthropology and a minor in Italian. 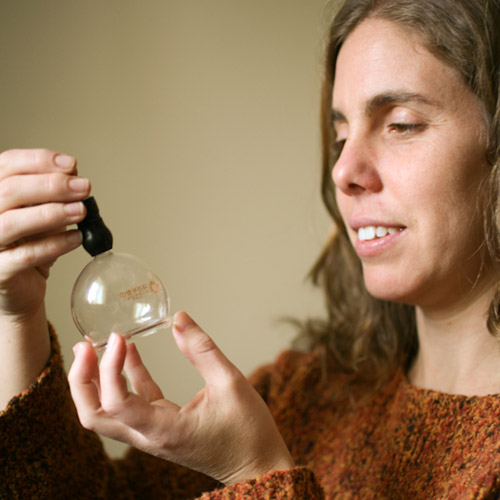 Discovering Her Passion
While at UVM, Robin became interested in more natural and holistic forms of medicine after dealing with a lengthy illness of her own and feeling frustrated by the limitations of Western medicine. Her quest began at the library where she read about different ideas regarding nutrition and how powerfully the food we put into our bodies can affect our wellbeing. From there, her interest branched into the study of macrobiotics. Robin spent some time at the Kushi Institute in western Massachusetts one summer during college, and it was there that she developed an interest in Chinese medicine.

During her last year of college, Robin found herself cooking brown rice and steaming greens and sea vegetables while her housemates were grilling burgers and drinking beer. She has since adopted a more balanced lifestyle somewhere in the middle, but at the time, it was an isolating experience. As a result, she sought out other macrobiotic-minded people in the community and through those connections found an acupuncturist. Robin experienced resolution of several lingering health problems through acupuncture and became intrigued with this system of medicine and this view of the body. She spent her remaining time at UVM immersed in an independent research project exploring and comparing the roots of Eastern and Western medicine.

Robin has done—and continues to do—a wide variety of continuing education inCraniosacral therapy, women’s health and fertility, and pain management, as well as other topics. She has interned in a wide variety of settings, including a free community clinic at Dimock Community Health in Roxbury; the Wellness Community in South Boston, where she worked with detox patients; and Pathways to Wellness (formerly the Aids Care Project) in Boston, where she treated a wide variety of patients, including those suffering from HIV.

Growing & Fostering Her Acupuncture Practice
Robin opened her first acupuncture practice in Brookline in 2002. Life circumstances brought her to central Massachusetts a year later. She opened an office in Holden, Mass., in the summer of 2003, where she has gained deep experience treating myriad health issues including addiction, depression, gynecological disorders, infertility, respiratory conditions, digestive ailments, chronic fatigue syndrome, fibromyalgia, and symptoms of HIV, AIDS, and cancer. In addition, she is a former assistant instructor in the Traditional Chinese Medical, Japanese acupuncture, and Structural Anatomy departments at NESA.

Since the birth of her son in 2006, Robin, a single parent, has worked reduced hours, but she remains committed to treating and healing her patients, continuing her education, and bringing new opportunities in East Asian Medicine to the Holden and Greater Worcester area.

Robin says, “What I love best about my work is having the opportunity to engage with so many different people. It is a gift to be invited into peoples’ lives, their troubles, and to have the experience of participating in their healing process and their life path in some small way. It is my goal to always try to be of help to the people who walk through my door. Sometimes my services are exactly what a person needs in a given moment, and other times I am a step along his or her way and hopefully a guide in the right direction. My patients are important steps in my own path as well.”

Leave us a review on Google!

Listen to Robin speak about Holden Acupuncture on TuneIn

Holden Acupuncture in the News

Robin recently had the opportunity to share her story with The BostonVoyager! Check out the full article here.

Check out Robin’s interview with All Business Media FM